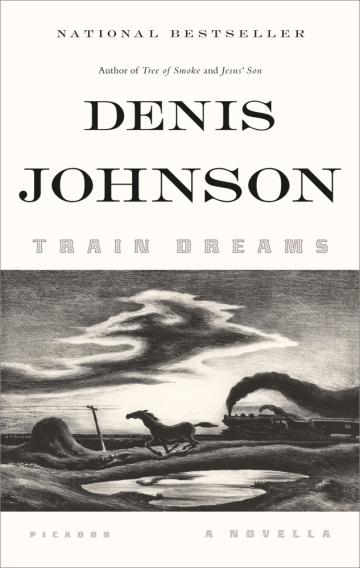 I’ve recently read two of Denis Johnson’s books, and they’re not light, summer reading. They’re heavy-duty stuff, with loneliness written all over them.

Each book has its own style. Train Dreams is a laconic novella, while Resuscitation of a Hanged Man borders on stream of consciousness. The latter is about someone who’s barely hanging in there mentally. He loses his mind enough to attempt suicide, after which he tries to reenter the fray of human existence, but finds himself in the mad, mad world of Provincetown, where the so-called “normal” rules of behavior don’t seem to apply. What’s a man to do in such a confusing situation? Fumble his way through purgatory. Reminds me of Neil Gaiman’s American Gods.

Train Dreams has a more objective perspective and streamlined prose. It deserves all the critical acclaim it’s received thus far. Johnson created a classic story of the American West: an everyman’s life of solitude, hard labor and muted heartbreak on the frontier. The ending is a knockout. The last paragraph is a perfect example of Johnson’s talent.

The “Old, Weird America” is in this book; the landscape and mindscape through which Bob Dylan has made himself legendary for tapping into. It’s that strange, haunting, semi-mythic place where life is hard and music runs deep; a high and lonesome world that’s worth coming back to.