Madrid has plenty of museums. When we were planning our trip, the Prado was big on my list. This art museum is among the world’s best, up there with the Met and the Louvre. It’s a must, if you’re in Madrid.

The other thing on my list was the Sorolla museum, which is housed where the painter Joaquín Sorolla y Bastida used to live.

I had no idea Sorolla had ever existed, or that he was even a big deal in the art world, until hubby and I were chatting at home in Vancouver one day about a lithograph we have that’s signed by the artist Chaim Goldberg. We looked up the value of this piece, which got me to asking about the painting sitting on the mantle above our fireplace. It’s a head-and-shoulders portrait of lady with a cigarette. It used to belong to hubby’s aunt and uncle, who loved Spain. I looked at the signature on the bottom-right corner of the canvas and read out “J Sorolla B” to hubby. He did a search, and we found out that, holy smokes, this guy is a big fricking deal. He’s got paintings hanging in the world’s best art museums, and here we were sitting in our living room looking at this painting that might possibly be worth at least thousands of dollars. This naturally got us excited, knowing that we might own a real Sorolla.

After we moved out of Vancouver and moved in for a stint to the DC metro area, we had an appraiser examine the piece. She came to our apartment, took pictures and sent them to an expert in Spain, who deemed the painting to be…a forgery. We’ve been thinking about getting a second opinion.

But regardless of the price tag of the painting, it remains sentimentally of value.

And it makes for a good story. We still like to hold out hope that we do indeed have a real Sorolla. 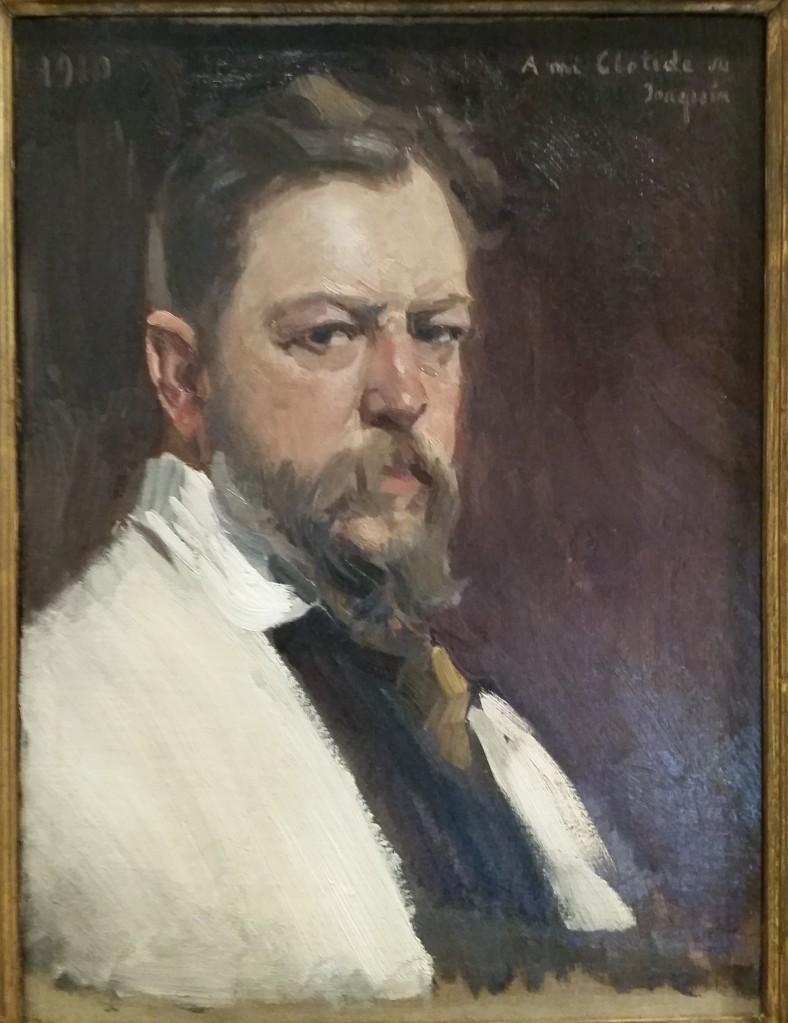 In honor of the painting, we wanted to see Sorolla’s works in Madrid. When we visited his museum, we were disappointed because there were only a handful of his paintings on display. There were two rooms closed (for renovation, I think), and the featured exhibit was of photographs. I learned that Sorolla was heavily influenced by his father-in-law, a photographer, and that he was very successful during his lifetime.

We had to wait until the Prado to see more of Sorolla’s paintings. 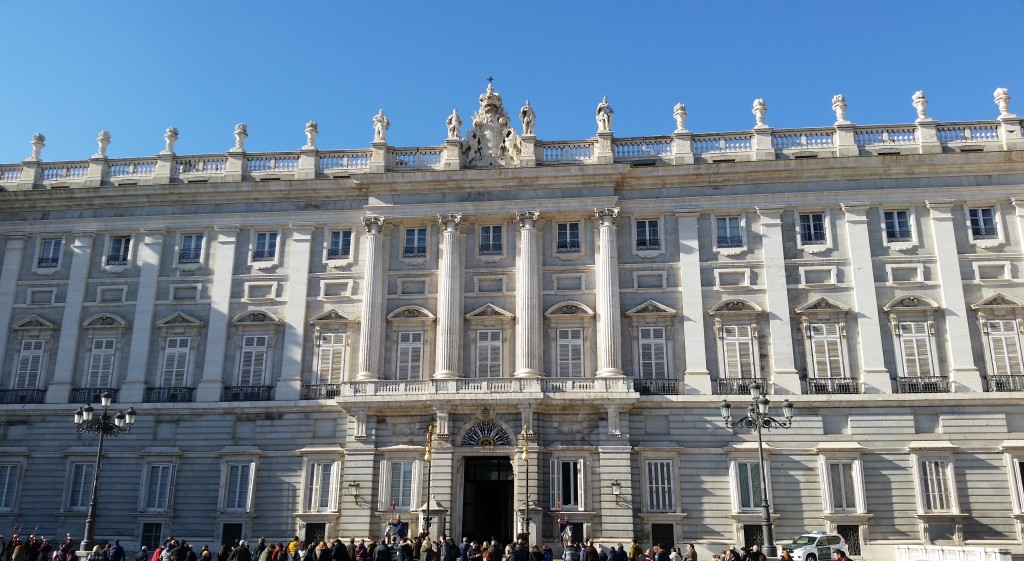 After the Sorolla museum, we went to the Royal Palace. There is so much ornamentation in this place that you’re on overload. The Baroque style is everywhere. It’s all beautiful, but, my goodness, what excess. I guess that’s the point, though: to show off the riches of the kingdom. The grand staircase entrance has a ceiling painted by Tiepolo, which was a cool surprise because the only other place I’ve seen Tiepolo’s work before then is at the Met. Tiepolo also painted the ceiling of the throne room.

The palace has several portraits painted by Goya. Other highlights: the Stradivari room, which houses several extremely valuable string instruments, and the armory, which is an offshoot of the palace. The armory has a large collection of historical armor and weapons, including armor worn ceremoniously by children. It’s surprising to see how small the armor is, and I’m not talking about the kids’ armor. The sizes border on girlish, which may be a statement on how people generally used to be on the smaller side historically.

If you’re a fan of guide books, I recommend bringing Rick Steves’ Spain guide along when you visit the Royal Palace. We found it very useful. Instead of needing a tour guide, you can rely on the book for descriptions on what’s going on room by room. 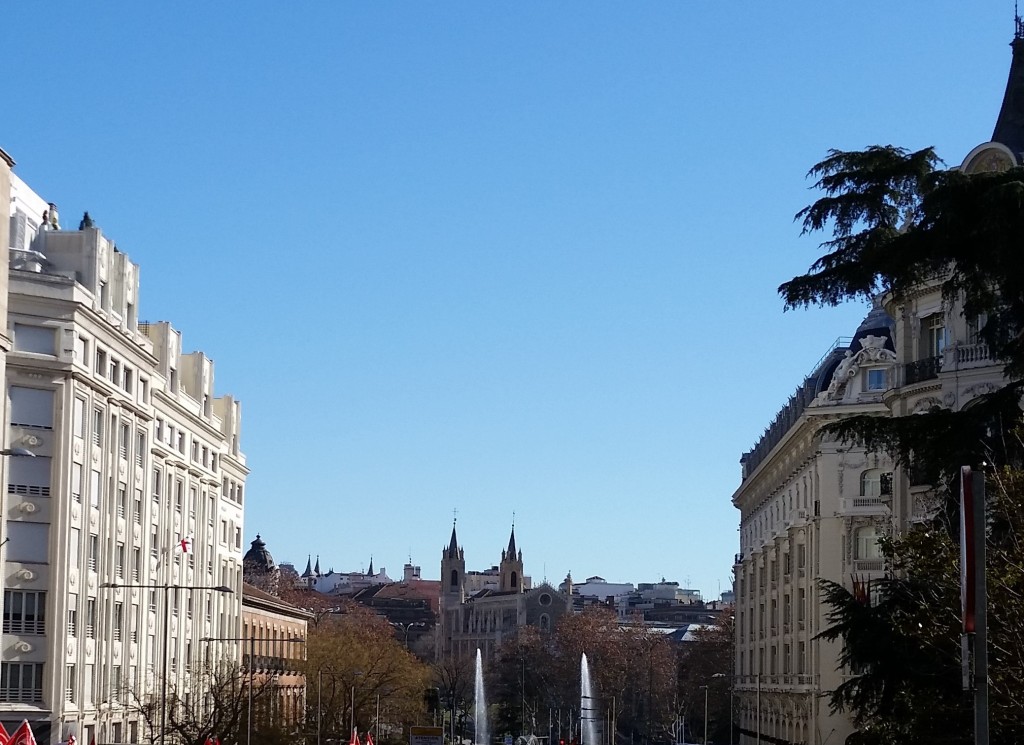 The next day, we visited the Prado. You can spend the whole day at the Prado. There is so much great art in there, I got a bit fatigued. It’s like art gluttony. So many great artists: Rafael, Hieronymus Bosch, Dürer, El Greco, Titian, Velazquez and Tiepolo, to name a few. And, of course, Goya. So many Goyas here, and they’re on more than one floor. The highest floor has early Goya. I know mostly Goya’s mature work, the portraits and the darker stuff (ex: “Saturn devouring his son,” “The Executions”). Early Goya, I wasn’t expecting; it’s romantic, cartoonish, decorative painting. In short, fluff. But, hey, the artist had to start somewhere. The early paintings do contain a style you see in his later work: In “The Executions,” the man about to be shot, his expression and the way he holds up his arms, that look is in one of the paintings upstairs. Except in that earlier painting, the mood is goofy. I wonder if Goya ever noticed that.

We also saw the Sorolla room. I’m struck by how his style was so wide ranging, from his famous light, airy seaside paintings to darker, earth-tone portraits.

We stopped by the Rafaels, too. I breezed past one, then doubled back and thought, woah, that’s a Rafael. Whether or not you care for religious iconography, you’ve got to hand it to the guy. He could paint.

We looked at the El Grecos, too. More on El Greco in the Toledo post coming up….