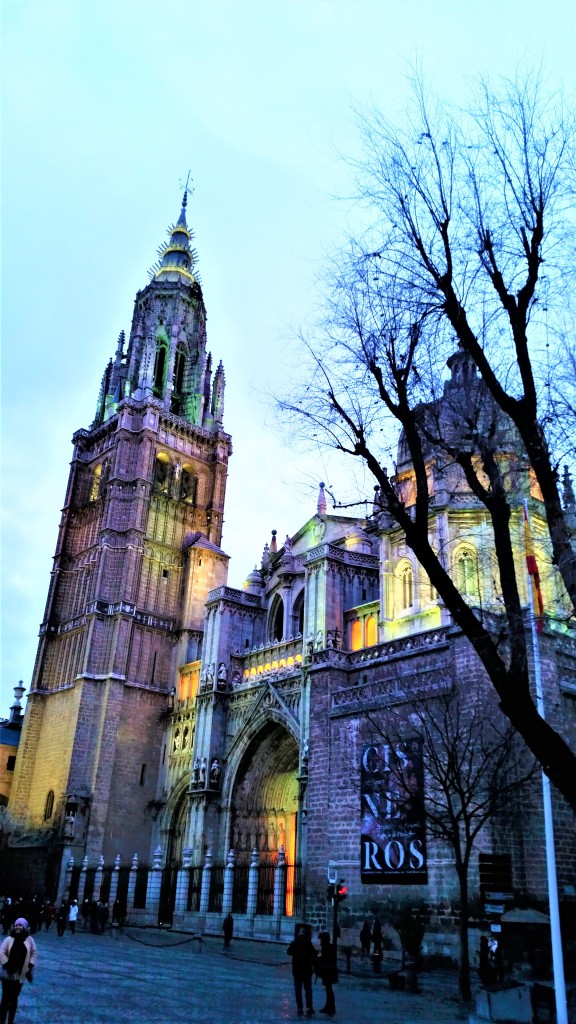 The primary point of interest in Toledo is the Cathedral. You’ll need to pay for a ticket to get in, but the fee is well worth it. It comes with an audio guide, if you want to pick one up. You can spend hours exploring all the sections.

The Cathedral dates back to the 13th century, and it was built on the site of what used to be a mosque. The history held in this magnificent building contains elements from the reign of the Visigoths, Moorish design and the Rococo style.

I was on sensory overload. Everything is over the top: the scale of the building, the sculptures, the ornaments, the paintings, the rooms. It is a glut of art and beauty. This place shows off money with excess. 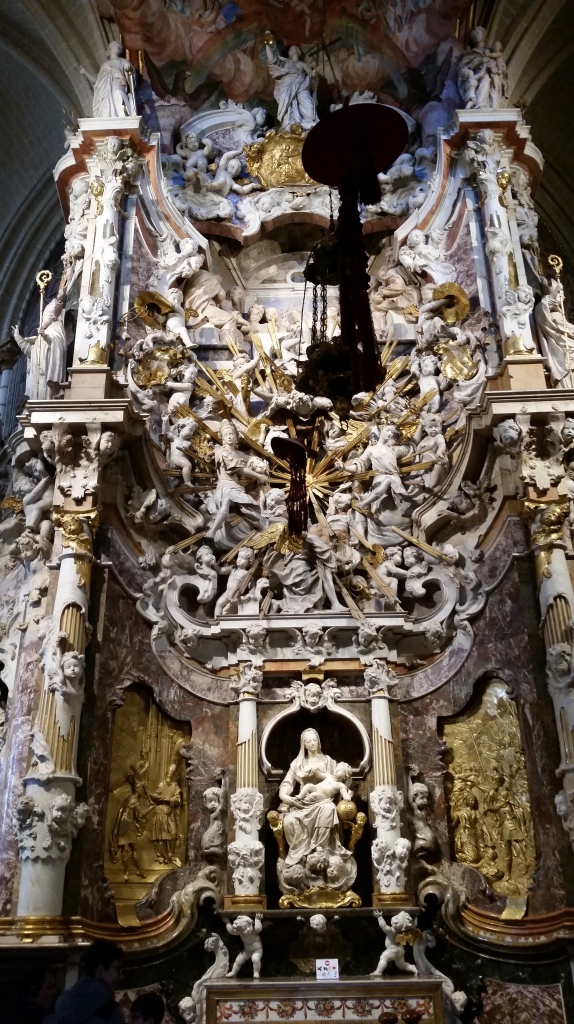 It also shows a fascinating amount of history. My favorite part was looking through the exhibit that includes books made by monks over the years. It blows my mind to be reminded in this way that the knowledge we have today is based on what has been passed down through time from people recording things onto paper. Looking at the old books is so cool, especially the ones that were adorned with art. There were even old music books in the exhibit that held sheet music.

The Inquisition is an undeniable part of the Catholic Church’s history, and the exhibit shows documents from that period, as well as artifacts from Judaic practices of the time. The Jews were expelled from Spain during the Inquisition, and it wasn’t until 2015 that Spain offered citizenship to the descendants of those who were expelled.

Toledo honors its Jewish Quarter with historic synagogues and a Sephardic museum. As another reminder of the deep religious history of the town, the historic synagogue we visited has typical Moorish geometric patterns along the ceiling.

The tools of the Inquisition are the subject of the torture museum in Toledo. This is a very small museum that shows the monstrous human capacity to inflict pain. On display are state-sanctioned instruments of torture; things to poke and prod and prolong agony. There’s even an iron maiden torture chamber there. The only moment of levity was what I like to call “the vat of shame.” It’s a 100-lb. barrel with a spiked collar that drunkards were forced to wear and walk around in. Oddly, the barrel was painted with folk art; I guess it was scenes of a drunkard’s folly. I picture Homer Simpson being forced to wear “the vat of shame.” It amuses me.

We also visited the El Greco museum, where we learned that the rich guy who bought the house at this site was suckered into thinking that the great painter had actually lived there. (Or maybe the guy was just willing to go on someone telling him, hey, I think El Greco used to live here.) There’s a painting in the museum that used to be wrongly attributed to El Greco, so the guy got suckered again, ha ha.

There are many of El Greco’s actual paintings in this museum. His work always stood out to me for its use of contrast and the bright pops of color. I learned that he might have had vision problems, which influenced the way he painted; his figures tend to be elongated. Like many of the old greats, he had a studio where he churned out art with apprentices who would work on this or that commission. His son took over his studio after he died, but the son wasn’t really into it; he was an architect.

We wanted to see the Roman ruins on the cliff above the Tagus River, but we couldn’t find the path to them. I was happy to settle for getting a cafe con leche from a local who had a stand at a park near the El Greco museum. He used instant coffee, but I didn’t mind because he managed to get it frothy. It was a decent cup of coffee served by an elderly gentleman whose face had character from years of sun weathering. We stood with our cafes on a cliff overlooking the blue-green Tagus cutting a valley down below. I imagine the ancient Romans used to walk to the river to wash their clothes and chat with each other. Living history. 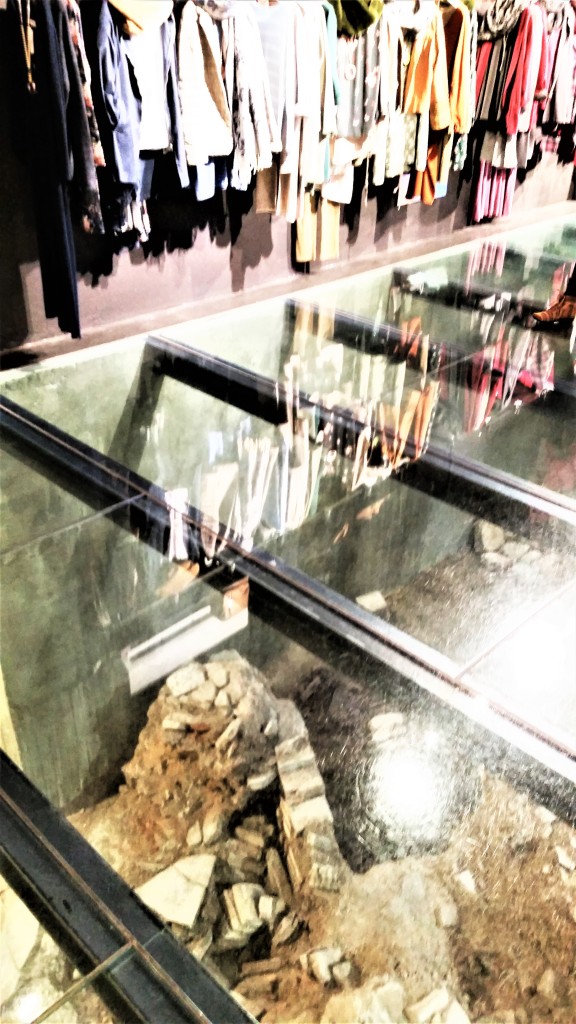 Speaking of living history, after we walked out of the Flora bar one evening, I spotted a stylish clothing store a few doors down. I walked in with the intention to check out the clothes, but the store also houses ruins dating from the time of Jesus right in their very basement. I bought myself a dark gray Costume National hat (it was only about $10, and it’s keeping my head nice and warm now), then we walked downstairs, where, surprise, surprise, the floor is made of glass so you can see the excavated ruins. Where else can you see such a vivid image of commerce sitting atop history?! It’s a trip. A small group of people followed us downstairs, and one of them started laughing. What a juxtaposition. I can just think of the pitch meeting for the store being built–let’s keep the floor open to draw people in! 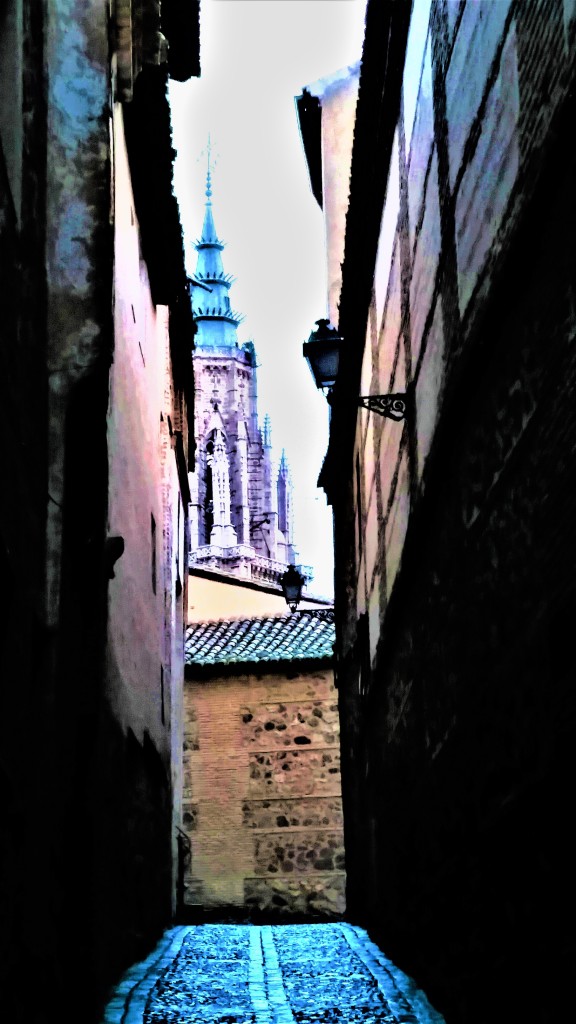 But for the most part, surprises are subtle in Toledo. As we walked through the cobblestone streets of the old town, I’d look up and a building would appear perfectly framed, as if the architects of the town had thought about where the eyes would rest as people went about their day through the winding streets. Toledo exists in a state of visual poetry. You see glimpses of this in Madrid near the Prado, but Toledo, the former capital of Spain, stands out for its architectural grace and beauty where ever you happen to look.