We visited San Francisco again for a few days on our way to our new home in Fiji (more Fiji news in upcoming posts, of course!).

I love San Francisco and wanted to return after our wonderful trip there last September. We stayed for about a week last fall, and when we came back to the city this time, I felt like I knew the place, knew the streets and could retrace our pathways from driving around town and environs last time. It was a pleasant feeling; starting to understand the lay of the land by reinforcing memories. We did quite a bit of driving in September, and I remember the streets well. I even remember how to get out of downtown and onto the Golden Gate Bridge, toward Mt. Tam and Sonoma.

This time, we stayed at the Kimpton Sir Francis Drake, a 90-year-old boutique luxury hotel with a lot of history, elegant embellishments in decor (like an opera house) and a modern look to the bedrooms. I was shocked at the average $400 a night price tag on hotels in SF during the summer when we were researching places to stay. Crazy. Luckily, we got an excellent deal on this Kimpton in Union Square; under $300 a night. Great place to stay. It’s a block from Union Square, a major shopping area, and a short walk to Chinatown. It also borders Nob Hill, a residential area, where we randomly found an excellent neighborhood restaurant called Aliment. 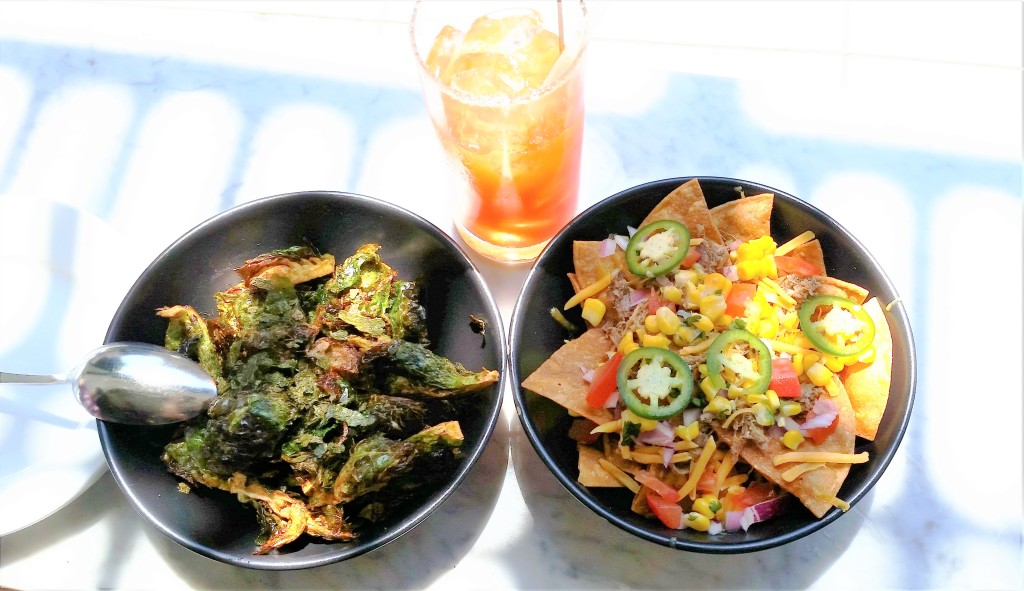 It was a Sunday, and Aliment offered happy hour all day. The food was excellent, and the vibe was classy but unpretentious. The bartender was chatty, golden oldies were playing, and a couple locals were sitting at the bar, who we later learned were the owner of Tacorea and a local scenester who has a cameo in Ant Man 2. This place was so fun, stylish and relaxed that we came back for dinner another night.

I was most impressed with the happy hour menu. I recommend the brussels sprouts, pulled pork nachos and chickpea meatballs. Plus, plenty of bloody marys to make it a party. The brussels sprouts were expertly fried, crunchy on the outside with a good balance of sweet from what I’m guessing is honey and salt from what I’m guessing is patisse (fish sauce). The nachos were classed up in presentation with the cheese unmelted and sprinkled on like the other toppings of jalapenos, corn, tomato, onion and cilantro with the tender pork shreddings. The chickpea meatballs are inventive and elegant; they have the texture of meatballs, holding their integrity while maintaining softness. I tasted bread or bread crumbs and a little milk in the mix; just like my own meatballs at home.

After lunch at Aliment on our first day back in San Fran, we intended to go to the free Flock of Seagulls concert at Union Square. I wanted to go for a lark. I don’t know any of the band’s songs, but I associate them with the very funny movie “The Wedding Singer.” I thought it would be fun, and funny, to see them live; really, I just wanted to see their legendary hairdos. I even told the bartender and the two locals at the bar at Aliment about the concert. I built it up so much only to discover that I was mistaken. It wasn’t the Flock of Seagulls in concert. It was Flock of Seagirls. Hubby was disappointed at first, and we joked about how embarrassed I would be if we returned to Aliment and told them who was really playing, but it turned into a funny story I ended up telling the bartender about when we came back for dinner the next day. The folks we met at Aliment and seeing the concert made us feel part of the neighborhood.

Flock of Seagirls is a cover band that does ’80s hits. The sound system may not have been great, but I had a lot of fun singing along to the tunes, songs from Madonna, The Beastie Boys and Cyndi Lauper, just to name a few artists. I commemorated the occasion by buying a tank top from the band during the set break of their two-hour show.

For our final day in San Francisco, we had dim sum at Hang Ah, which calls itself the “first dim sum house in the U.S.,” dating back to 1920. I’m not sure if that’s an accurate statement, but I do recommend eating here. It has a classic dim sum menu, plus entrees of noodle and rice dishes and soups. We stuck with dim sum such as shrimp and pork dumplings, which were delicious. I slathered everything in the chili oil they had on the table. I loved the salt and spice of the oil.

After dim sum, we saw a movie at the indie theater toward the piers: “Won’t You Be My Neighbor?” about the legacy of the man we know as Mr. Rogers. I used to watch him on PBS as a kid. It was fascinating to realize what a spiritual warrior he was; always intent on being a force of good for healthy child development, trying to make the world a better place by helping raise better kids. Fred Rogers had a gentle demeanor, but he also had will. You can see the fire in his eyes at moments in the documentary, particularly when he makes his point to a very cranky senator during a hearing that up until Rogers’ speech seemed to spell doom for PBS funding. I finished the film wanting to know even more about the man; more about how he fought with his demons and forged on and more about his family life. Alas, Mr. Rogers has passed, so he can’t be revealed more with direct questions. But his work lives on and continues to shape young minds.

If you like what you see on ATB, consider showing your support by shopping at my Society6 and RedBubble online stores. Every product features my original, hand-drawn artwork.